Much like Wikipedia, on Shared Reality we want everyone to be able to contribute, when they have subject-matter knowledge, and so help to improve the discussion and debate, helping us all to find the truth. Also like Wikipedia, we want to avoid people abusing this open system.

Although we want to avoid the spread of disinformation through our platform of course, this is mostly done by the people debating each other. We do not employ fact-checkers, we allow the two sides of a debate to fact-check each other. However, there is still a role for mediation.

When you are adding a node to a map – a reason or objection – you can see that it's a draft by the red word ‘draft’ on the side of the box: 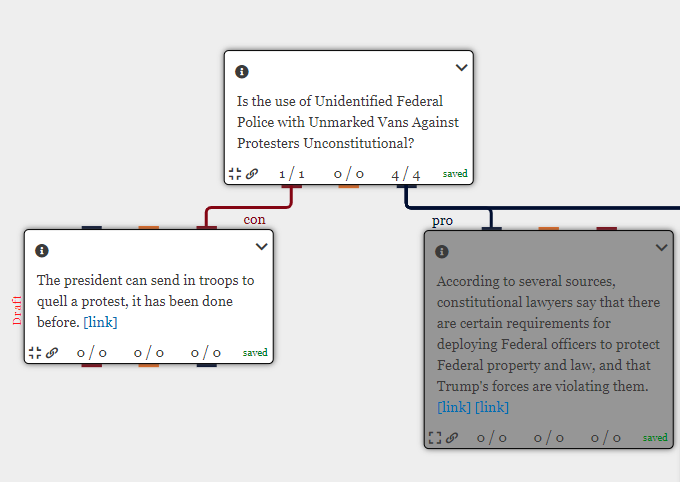 If you hover over that, it says ‘you can still edit this node by double clicking on it because it's not yet been approved by a mediator’. There is a mediator, also known as an editor, who will get a notification whenever the node is submitted. (Don’t worry if you edit the node a few times, they won’t mind a few notifications!) The mediator/editor will log in and view the node – not to fact-check or tell you what you can or can’t argue, but just to check that the basic guidelines are being followed.

The guidelines – or best practices – are listed and described here, but in short, they will be looking for instances of loaded language or propaganda, name-calling, innuendo and emotionality; or things that are inferred or some kind of dramatic framing – things which may get in the way of having a productive conversation.

And they may also do just a minimum amount of mediation or editing just to make sure that the message is clear – perhaps break it into two parts or two separate nodes if there seem to be two points, for clarity and the ability to discuss or debate both of them they should be separated. This is, again, only to resolve issues which may get in the way of having a productive conversation

So that's the role of the editor, and so the editor will come in and make whatever changes (if any) they deem necessary, generally as an addition which will be clear to you, and with a note that it is from the editor, and when they are done you would receive a notification that your node has been updated by the editor. You will then have the chance to accept the changes by removing the part that indicates that it is from the editor. Your update of the node (removing the “from the editor” bit, or editing it in some other way that you think will fulfil the mediation request) will of course alert the mediator again. When they are pleased, they will go ahead and publish the node.